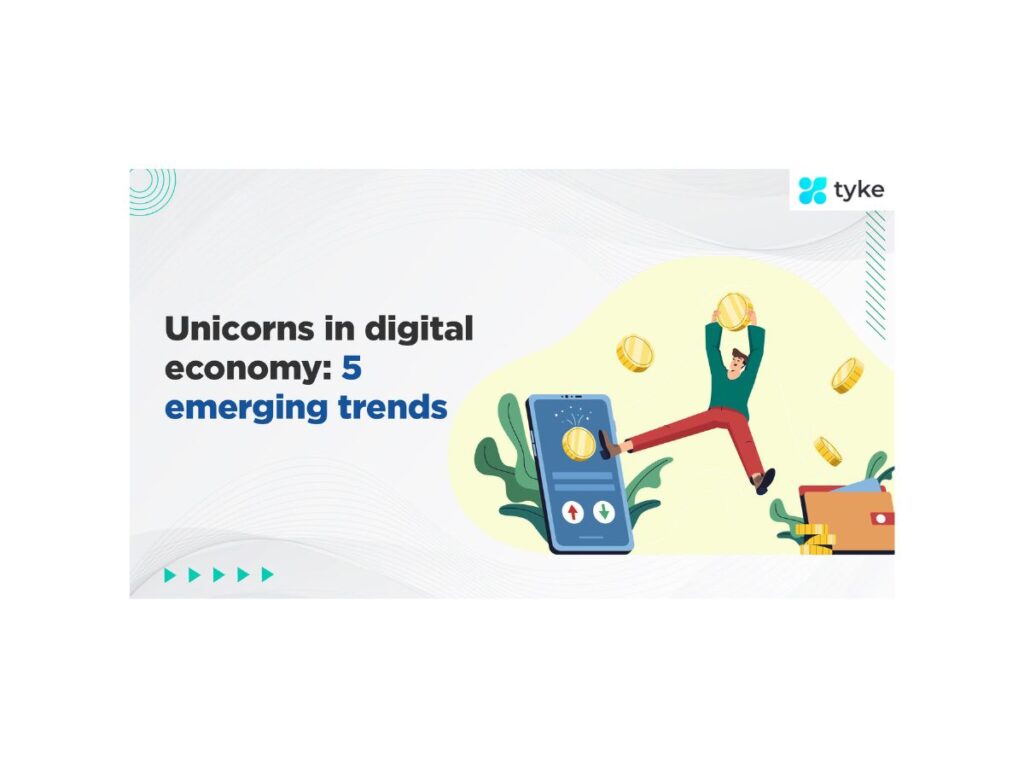 Unicorns are given a special identity based on their special magical powers. In today’s business world, unicorn companies are those startup companies that have managed to achieve a $1 billion valuation without even being listed on the stock market.

India, one of the topmost ecosystems for startups, has seen many emerging unicorns since the first unicorn company in 2010.

You must be surprised that the first Indian unicorn company was MakeMyTrip, which took 10 years to become a billion-dollar valued company. But after that, there has been no looking back for Indian startups.

Here are the 5 emerging trends of Indian Unicorns in the digital economy:

The Exponential Growth of Unicorns Everywhere

As of 2022, India has registered 108 unicorns worth $338.5 billion after the United States and China. The United States tops the position with 865 companies, followed by China with 224 unicorns.

In fact, over the last two years, there has been a considerable increase in the number of unicorns globally, India being another developing country pioneering the startup ecosystem.

So, what suddenly changed over the last two years?

COVID-19 in 2019 has led to a great socio-economic suffering worldwide. When the going got tough for most of the population globally, the resilient Indian entrepreneurs chose to become the tougher who chose to get going by working seamlessly on their dreams and contributing towards the Indian economy by implementing their ideas successfully, making India another hub for emerging unicorns.

The year 2021 marked the year in which most people worked from home. The same year was also marked as the year of digitalization for the Indian conglomerates.

In India, the startup rate grew rapidly because the entrepreneurs were given an adequate environment and facility to grow. Despite diversified geography, many startups emerged from India’s Tier I and Tier II cities.

While Bengaluru, Delhi-NCR, Mumbai, Hyderabad, Pune, and Chennai were considered as the established hubs for the startups, cities like Ahmedabad, Kochi, Jaipur, and Kolkata also saw some promising business startups marking their niche along with cities like Kanpur, Chandigarh, Coimbatore, and Thiruvananthapuram.

Before the pandemic, the most Indian population was dealing with the traditional commercial system. In fact, it has led to the growth of different types of unicorn companies. The growth of the fintech system over the last couple of years led to the use of digital payments like UPIs and other online platforms for payment. In fact, the exponential growth of the fintech sector in the country has increased the sector’s potential immensely.

Other platforms like consumer apps have also enabled the country’s digital infrastructure by providing them financial leverage with products like – “buying now and paying later” (BNPL), mortgages, digital banking, wealth management, and insurance.

Additionally, the digital infrastructure has also opened the gates for the mainstream use of digital currencies like cryptocurrencies and other digital assets like digital wallets and other online payment gateways.

Many startups have already joined the unicorns club, and many more are anticipated to join the unicorn bandwagon soon based on their highly advanced and innovative products and services.

There are many reasons for the rise of unicorns in the past few years. The most prevalent reason is that investors have been more willing to take risks and invest in startups with high growth potential, especially if these startups are solving large-scale problems.

The Venture Capital Industry has seen an increase in investments from Unicorns.

There has been a consistent increase in the number of angel investors, venture capitalists, and other investors for the emerging unicorns lately. Considering the success of the unicorn companies, most of the investors have successfully

The rise of Corporate Giants has been a trend in the business world for decades. These companies have a powerful monopoly over their respective industries, and they are constantly striving to grow their reach and influence. This section will explore how some of these companies have partnered with other businesses to continue growing and what this means for the future of Corporate Giants.

In recent years, you must have seen a new kind of partnership emerge between two Corporate Giants: one that is more strategic than ever before.

There are many reasons why these companies have such a high valuation. One of them is their potential for profit growth. They have an exponential growth rate, leading to their high valuation. Another reason is the lack of competitors in their industry, which means they can grow without competition from other companies.

Surging unicorn companies are currently not only shaping up the capital markets but also redefining industry standards. On the one hand, these companies are trying to expand their market with innovative and technologically advanced products and services in newer markets.

While most startups seem to be promising, not all of them do not have to be successful. However, the startup ecosystem has expanded in the last couple of years. Looking at the current trend in the startup ecosystem, these organizations will keep minting money, raising a significant amount. There would be further opportunities for investors and venture capitalists to mint more money by collaborating with these companies or innovating with them to surmount increasing competition from these emerging unicorns.