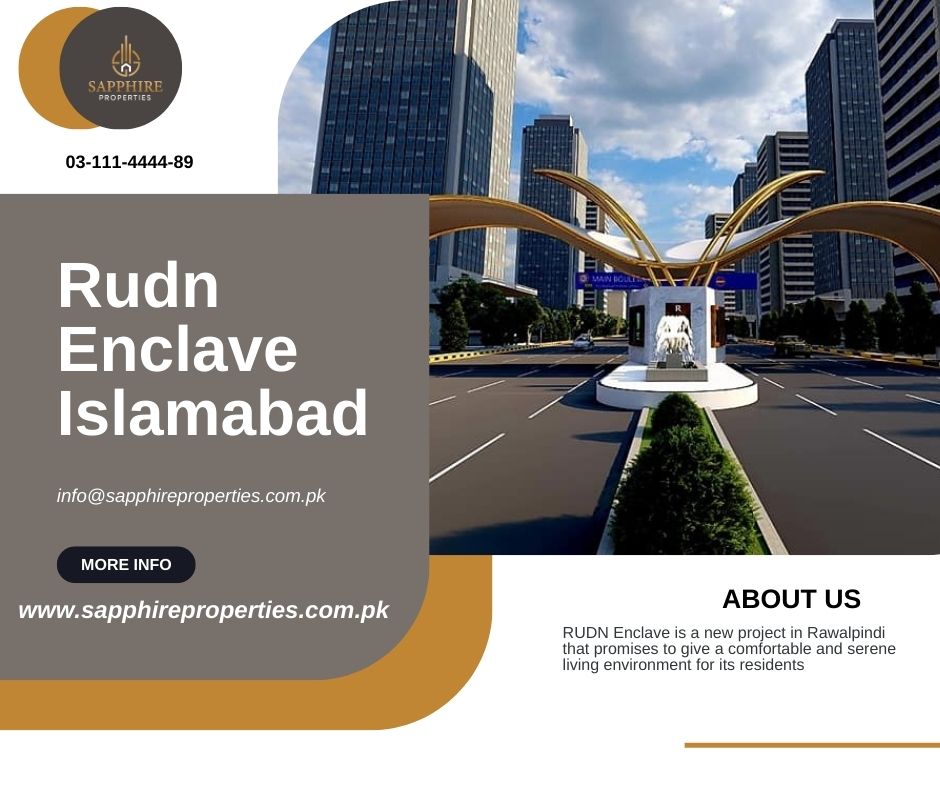 The management has released the partial maps of a few blocks of Rudn. The map of Block A to Block G is live now. According to Rudn Enclave Master Plan, Block A, C, G, and Block H have residential blocks, and these blocks have 5 Marla to 1 Kanal plots to sell. In addition, you can also find commercial plots of 4 Marla, 8 Marla, and 1 Kanal.

When it comes to Block B, is designated for villas and will be sold to investors at a later stage of development. In the D and E blocks of the Rudn Enclave, you will find farmhouses of 4 and 8 Kanal. Commercial plots are also available there.

The minimum size of the street in Rudn Enclave is 30 feet, and the minimum road size is 60 feet. The size of the main roads is 200 feet, and on 200 feet wide roads, there is 1 Kanal commercial plot. There are a few blocks on the released maps, such as H, I, J, K, and L Blocks. These blocks are not launched yet but will be launched soon. In addition, the management is also thinking of launching new blocks such as Overseas Block and Prime Block.

Let’s learn about the Rudn Enclave General Block and Executive Block in detail.

The old planned location of the Rudn Enclave is the General Block which has blocks from A to G. In the general block A, C, and G, you will find residential plots of 5, 7, 10 Marla, and 1 Kanal. There are commercial plots of 4 and 8 Marla and 1 Kanal in the same block.

The first entrance area of the society is also Rudn Enclave, which is easily accessible from the Rawalpindi Ring Road Interchange. It is right adjacent to the society’s entrance. So, the general block of the society will directly link with the Ring Road via Adyala Interchange, which makes this block a hot location for investments.

Due to the ring road alignment, the block’s development work was delayed, resulting in some changes in the master plan of Rudn Enclave. The development authority NESPAK will finalize the changes, and after that, development work will resume in the general block.

It is a newly launched block of the Rudn Enclave on the Adyala Road and starts from the same road and ends at Jawa Dam. The executive block Rudn Enclave Location is ideal as it links with the Ring Road and General Block with the internal main boulevard. The boulevard will be 200 feet wide and will connect both areas.

When it comes to the development status of the executive block, it is much better than the development plan of the general block. Street and road sizes are bigger in the block, such as the minimum street size is 40 feet. In addition, almost 40% of land in the block is for residential plots, and 60% of the land is for amenities such as entertainment areas, parks, sports facilities, and shopping areas.

If we talk about the payment plan of the Rudn Enclave, it offers an easy payment plan with easy installments. The prices of plots in this scheme are lower compared to other housing schemes. In addition, the location is ideal as it is right next to two beautiful dams, Jawa and Kassala. So, prices are very reasonable if we look into society’s amenities and facilities.

When deciding to invest in any housing scheme or development project, most investors want to know the project’s legal status. So, when it comes to Rudn Enclave NOC, the developers have submitted all the documents and hope to get them soon. In addition, NESPAK, a reputable government organization, is one of its developers. The organization has already completed many projects successfully. So, investors can invest in society without fearing fraud and investment loss.

The development status of both blocks is different from one another. The executive block is the first area of development where construction work is on a large scale. There is also a site office where people can briefly introduce the project. The staff of the site office shows the entire development area to the investors, including the area of Khasala and Jawa Dams.

We have discussed everything about the master plan and blocks in Rudn Enclave society. In conclusion, we can say that it is a society with dream plots for all class people, whether they belong to an upper class or middle class. Like many other housing societies, such as Blue World City, which offers world-class facilities and amenities, Rudn Enclave offers its residents high-end facilities at an affordable payment plan.