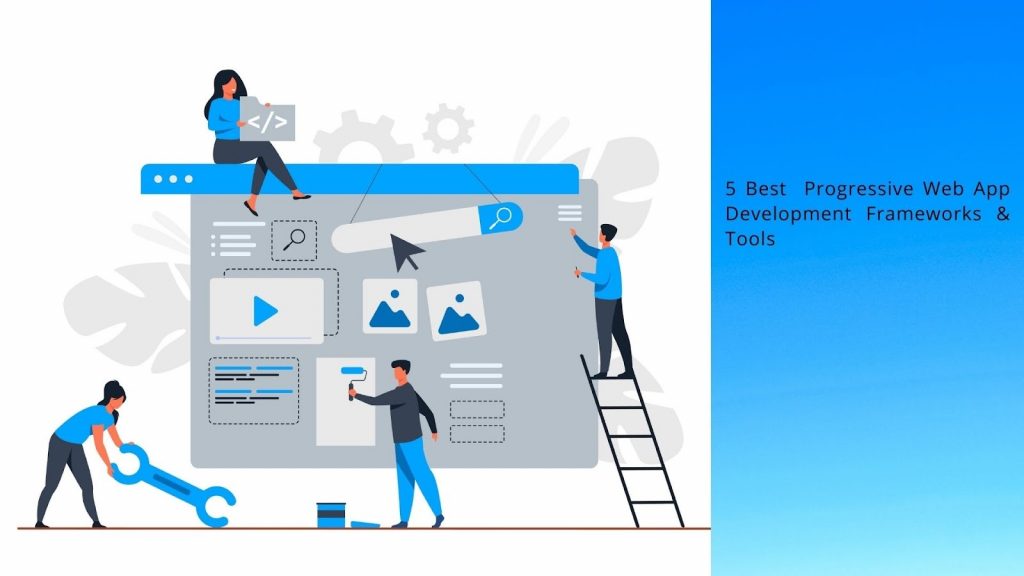 Progressive Web Apps, or PWAs, bring a middle path between the website and the mobile apps by balancing the goodness of both. They are easily accessible without any commitment, just like any websites opened with browsers. At the same time, they allow app-like user experience attributes such as direct access from the device’s Home Screen, offline access, syncing with native device features and functionalities, etc.

No wonder many businesses just find them lucrative options to build their digital footprints. Fortunately, any web application development company has several frameworks and tools at their disposal for building PWAs. Let’s have a look at some of them.

ReactJS, the leading JavaScript library, is regarded as an ideal choice for Progressive Web App (PWA) development. It is modular in character, highly scalable, platform-agnostic and equipped for all modern web features and functionalities. Web projects can hire frontend developers with React expertise for building PWAs.

React has been used in many of the world’s leading web apps, including many successful PWAs. Some of the key strengths of React for building PWAs include fast-paced rendering thanks to virtual DOM, one-way data binding for faster loading time, robust local caching support for offline access, HTML flavoured JavaScript with JSON format for easier code maintenance and updates and several others.

Polymer is a robust open-source toolset developed by Google that comes loaded with a whole array of powerful components and data formats to simplify PWA development. Thanks to its simplicity and inbuilt support for a diverse range of devices and web components, it is often used by PWA developers.

It utilises trusted and tried web technologies such as HTML, CSS and JavaScript and allows any developer with elementary knowledge and skills to create dynamic web apps, including PWAs. Some key aspects that made Polymer a great technology for PWA development include routing support, responsive mobile layouts, simplified API, out-of-the-box debugging tools, and meticulous documentation.

A major and unmistakable feature of any PWA is offline access. This widely popular open-source JavaScript module bundler is considered the best tool for creating the offline function of a PWA.

Webpack achieves this smooth offline function development for PWA by creating dependency graphs linking UI-specific JavaScript and CSS elements such as image files, fonts, and others. The dependency graphs offered by this tool prevent waiting for the server responses by ensuring faster loading of static UI elements.

With such a robust capability in creating offline functions of PWAs, Webpack continues to feature in the must-have tool-set of PWA developers. The tool requires only a bit steeper learning curve, which is why most seasoned developers use it in their web projects.

Knockout is regarded by many as a dynamic development solution for all kinds of web projects, lighter, inbuilt and responsive across devices and browsers. Knockout is mostly used in PWA projects accompanied by JavaScript for handling Model-View-ViewModel (MVVM) development protocol. Besides, it is a very lightweight and low-footprint framework measuring just 13KB in size.

Some of the key aspects that made Knockout a great choice for PWA development include rich web features and functionalities, speedier execution for shaping the core app as a proof of concept, easy extension to HTML without needing to handle complex JSX, inbuilt templating elements for shaping complex app in easy instalments and lower learning curve for developers.

AngularJS is a powerful and dynamic web development framework that has been used in many successful PWA projects across the niches. The latest AndroidJS 5 version has come loaded with several value additions aiming at PWA development.

Ionic is a popular hybrid web and app development framework built with Angular and Apache Cordova. Used across millions of web apps, Ionic comes with a load of reusable components for any web project, including the PWAs.

Some key reasons to choose Ionic for PWA development include inbuilt browser instruments for faster web rendering, compatibility with all platforms for optimum performance, out-of-the-box debugging tools and a robust library of plugins that can easily access any kind of APIs.

Svelte is another low-footprint and component-based framework known for its reactive nature for developing awesome PWAs. The framework is popular for PWA development on many of the world’s leading brand websites.

So, here we are after briefly exploring the leading PWA development frameworks and tools. Maybe not all of them are equally used for PWA projects, but all of them stand out because they provide the tools, features and functionalities for developing robust PWAs.