Web App Vs. Progressive Web App: Why Are They Different From Each Other? Apps are enabling businesses to reach customers like never before. They serve users in different ways, whether they are web apps or PWAs (Progressive Web Apps).

PWAs have gained popularity in a relatively short time because of the advantages they bring. They are the perfect middle ground between web and native mobile apps, minus their limitations. 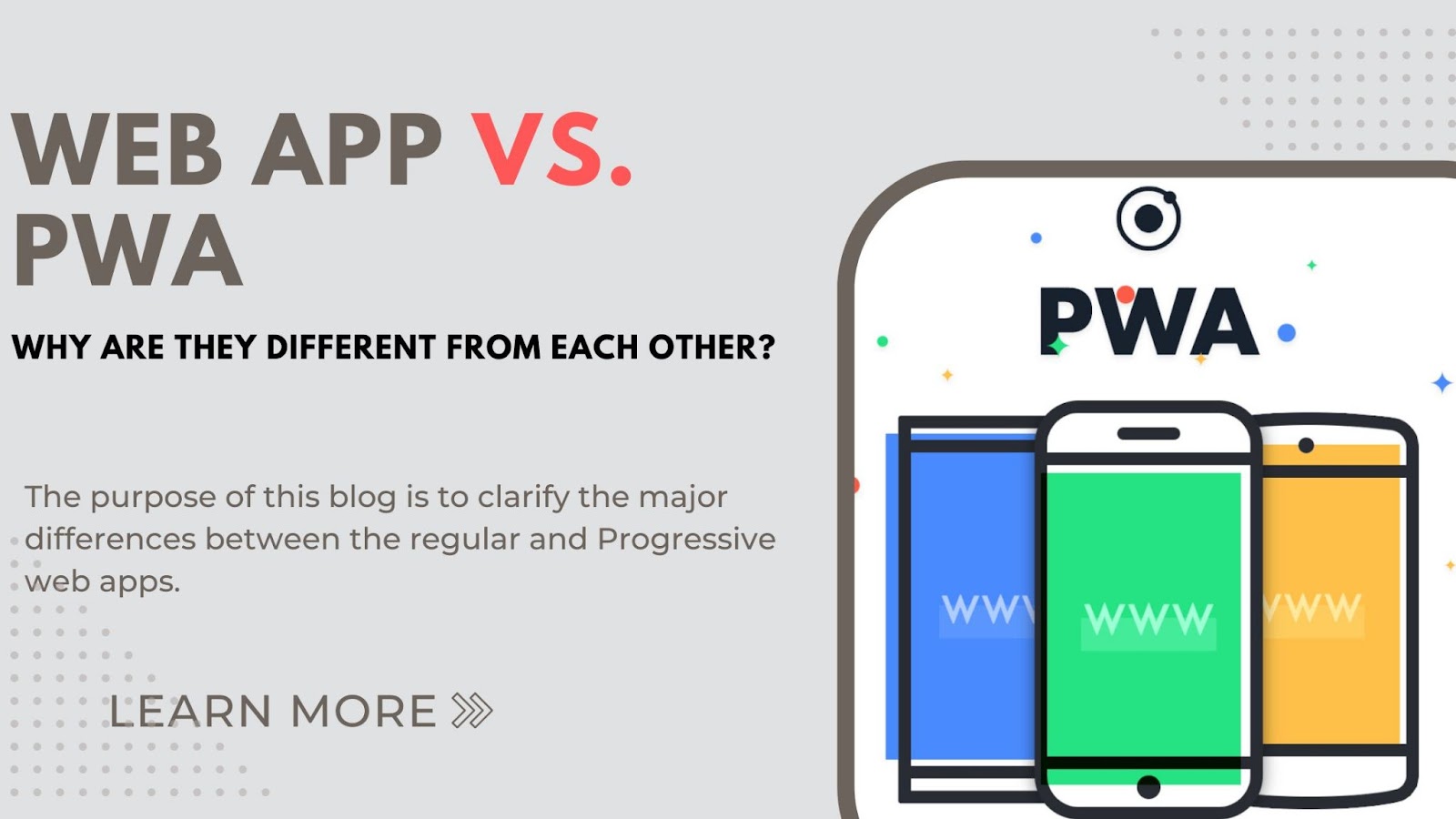 You may have heard of PWAs before, but what exactly are they, and how do they differ from the web apps we already use?

The purpose of this blog is to clarify the major differences between the regular and Progressive web apps.

Before that, here’s a quick glance at what a PWA means.

What Is A Progressive Web App?

A Progressive Web App is, at its core, a website capable of running within a web browser. However, it is designed to work like a native app that users can install and access directly onto their devices.

It can also provide app-like features like push notifications and GPS navigation to its users, among other advantages. Its performance will, however, depend on the Progressive Web App development company you hire.

Uber, BMW, Spotify, Twitter Lite, and Starbucks are great examples of globally-renowned businesses that have launched Progressive Web Applications for a number of benefits.

How Are Progressive Web Apps Different From Traditional Web Apps?

Let’s look at the various differences between the two types of web apps you would hire web developers for:

Progressive Web Apps can provide a native app-like experience to the users, as opposed to regular web apps. They offer touch-responsive elements, virtualized list scrolling, and skeleton screens for an enhanced UX. Moreover, users don’t have to update a PWA.

The user experience in a PWA is further enhanced with performance-based improvements. This includes resource caching, which leads to lower data consumption and quicker loading. Businesses can also send push notifications to their customers to let them know of upcoming sales.

Although web apps are primarily designed to run on web browsers, developers can create mobile-friendly versions that work well on device screens of varying sizes. On the other hand, a Progressive Web App is compatible with all existing devices and operating systems.

A regular web app can also extend various functionalities of the device and browser, but it needs to be compatible with both in order to do so. For instance, there may be certain features of a web app your device can support, but you won’t be able to run them if the browser isn’t compatible, and vice versa.

Traditional web app owners may need to refer to a Progressive Web App development company to determine the versatility and compatibility of their web app.

Web apps work only on web browsers. They collect data from users through web forms, transferring data to the app server. Once the required action is performed, the resulting data is sent back to the web app’s browser.

A PWA does that and more. For starters, you can run it on your browser or install it on your device. It even updates in the background while the users are running it. This helps in two ways: it instantly provides every user access to updated features while eliminating their need to perform any updates.

Web apps also require a stable internet connection to work; they’re useless without one. However, users of progressive web apps can gain access to its features even when their devices aren’t online.

PWAs undergo a similar development process but have a few distinguishing features when compared to traditional web apps. For instance, Progressive Enhancement is a concept that finds its use in PWAs. It enables them to work on far more known and unknown devices compared to regular web apps.

The technique follows the thought process of delivering essential content to as many users as possible, regardless of whether their device or browser can run the latest features. So, a PWA is more likely to work on an older device than a traditional web app.

Progressive web apps consist of a single codebase that can work on several platforms and devices. Consequently, a PWA is simpler and more cost-effective to build and maintain, regardless of the purpose or complexity. It also provides greater functionality and compatibility through a similar development process.

Users are increasingly moving toward PWAs for multiple reasons. They are designed to provide access to data on the go since they can run with little to no internet speed. This enables users to refer to PWAs when they need access to the app on the go.

Furthermore, PWAs are more likely to improve visibility as users already prefer them. You won’t have to undergo the entire App Store submission process with a Progressive Web App. In other words, you’ll save plenty of time when you hire web developers to build one.

These are the major distinctions between the two types of web apps popular today.

Needless to say, a Progressive Web App offers some definitive advantages over regular web apps. These advantages compel businesses to develop and launch PWAs of their own in the market.

So, if you already have a website and are wondering whether you will need to build a PWA from scratch, don’t worry. You can hire web developers to turn your website into a Progressive Web App.